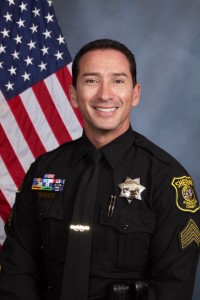 In 1995 he became a full time Police Office with the Waterford Police Department. He became involved with the D.A.R.E. program, and was a D.A.R.E. Officer for the Waterford schools. In 1998 the City of Waterford contracted with the Stanislaus County Sheriff’s Department, and in July of 1998 he became a Deputy Sheriff. As a Deputy, Marc has served on S.W.A.T., was a Hostage Negotiator, was a Detective in SIU (Special Investigations Unit), and Homicide. He has been an academy instructor, as well as a patrol Field Training Officer. Sheriff Adam Christianson promoted Marc to the rank of Sergeant in 2009. As a Sergeant, Marc supervised patrol, and the Hostage Negotiators Team. He was also a Sergeant in charge of the Civil Division.

In 2015 Sheriff Christianson promoted Marc to Lieutenant where he was assigned as the patrol Watch Commander. In 2016 he moved to the Civil Division where he supervised it for a year and a half. In December of 2018 he became the Chief of Patterson Police Services, where he is currently stationed.