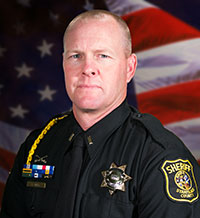 Chief Erin Kiely obtained his B.A. Degree in Criminal Justice from CSU Stanislaus in 1994. He began his full-time career in law enforcement in 1995 with the Clovis Police Department, in Fresno County. He transferred to the Stanislaus County Sheriff's Department in 1997 where he continued to work as a patrolman. In 1999 he was assigned as a detective to the General Crimes Unit where he specialized in Rural Crime. This same year he was selected for the Special Weapons and Tactics Team where he later went on to become the Assistant Team Leader. In 2002 he joined the Mounted Unit. He promoted to Sergeant in 2005, where he went on to supervise patrol. Afterwards, he became a Detective Sergeant and supervised the General Crimes Detectives who worked: Arson, extradition, burglary, financial crimes, identity theft, rural crimes and High Tech crimes. Chief Kiely also continued to supervise on both S.W.A.T. and the Mounted Unit. In 2007 he supervised patrol, detectives, traffic, and records at the Riverbank Police Services Substation. Chief Kiely has worked for Riverbank Police Services, off and on, since this time. With his 2013 promotion to Lieutenant, he was assigned to his current role, Chief of Riverbank Police Services.