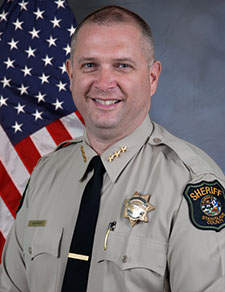 Micky was born and raised in Modesto and graduated from Johansen High School in 1995. He joined the United States Air Force as a Security Policeman and had assignments at Grand Forks AFB, North Dakota and FE Warren AFB, Wyoming. During this time, he was deployed to Saudi Arabia on a temporary duty assignment in support of Operation Southern Watch. Micky was honorably discharged in November 1999 and returned to Modesto.

Micky was sworn in as a Deputy Sheriff-Coroner in 2001 and assigned to patrol. Over the course of his law enforcement career he’s had various assignments including patrol in the contract city of Patterson, K-9 handler, Field Training Officer, Bailiff, Hostage Negotiation Team (HNT), and Peer Support.

He holds a Bachelor of Science degree in Criminal Justice from California Coast University. In his off time he enjoys Star Wars movies/shows (not the prequels), cheering on the Boston Red Sox, and spending time with family and friends.