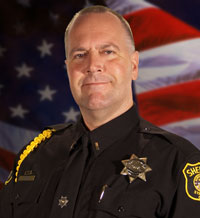 Lt. Gregg Clifton graduated in 1989 from California State University, Hayward with a B.S. degree in Criminal Justice. After graduation he worked in the private sector before beginning his career with Stanislaus County Sheriff’s Department.  In 1997 he was hired as a Deputy in the Adult Detention Division.  In addition to working all three facilities he has served as Transportation Deputy, Field Training Officer and Scheduling Deputy.

In 2003 he was promoted to Sergeant where he continued working all three facilities.  In August 2004 he was assigned to the Jail Alternatives Division as Coordinator of Sheriff’s Parole, Electronic Monitoring, Work Furlough, and the Alternative Work Program. He also served as the Regional Director of CEMA (California Electronic Monitoring Association).  As a Sergeant he managed the FTO program and was an instructor for the Ray Simon Regional Criminal Justice Training Center.  Throughout his career, he has served on various committees including President and Vice President of the Sheriff’s Employee Foundation, member of the Sheriff’s Review Board, member of the negotiation team for the Deputy Sheriff’s Association, and CARE Ambassador for the Sheriff’s Department.

In July 2006, he was promoted to Lieutenant in charge of the Bureau of Administrative Services Unit and oversaw Personnel Scheduling, Classification Unit, Detention Narcotic K9 program, and policy and compliance. In 2009, he was assigned to the Public Safety Center as the Jail Commander and currently direct the FTO Program.

Inmates confined within the Facilities will have equal and adequate access to telephones in order to maintain community ties and contact with legal representatives.

Collect call telephones are located in the day room area of your housing unit. These telephones are available to Inmates at any time during "Inmate Free Time." To utilize the phone, simply lift the receiver and follow the posted instructions. Telephone calls will be limited to fifteen (15) minutes in duration in order to provide telephone access to all inmates.