Commissary will be scheduled as often as time allows.

Commissary order forms will be made available to all inmates in all housing areas listing the items approved for purchase. The exception is as follows:
• Inmates in a disciplinary status and who have lost their commissary privileges may only order from the special short order form.
• Inmates will be able to select as many items as described up to $100.00 worth of commissary in their possession at any one time.

Should the inmate be out of the housing area for court, hospital, etc., the vendor will deliver the commissary to the Housing Deputy or Shift Sergeant, and arrange for it’s delivery to the inmate. (NOTE: Care should be taken that inmates confined at the hospital do not receive items that may not be medically allowed for that inmate’s well being).

Effective November 1, 2011, Money for inmate accounts will only be accepted through TouchPay Payment Systems. 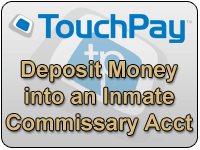